An old expression which means coming up a bit short in your back, or not feeling very good.

There’s a train made out of a cardboard box. A little girl is sitting hunched with her back to me. She says she is feeling tim-lay-lav.


A long, narrow courtyard that was once the headquarters for spies is now unoccupied. There is no need for spies anymore because the world is functioning without secrets and no longer requires espionage. The government has, therefore, executed the spies to remove all trace of previous corruption, wanting to start anew.

A game is invented making use of the long, narrow courtyard, now desolate apart from two officials. Black bin bags containing the remains of the slaughtered spies are laid out in two lines, perhaps ten bags in each row. There are two tyre swings, and the arc runs the length of the courtyard.

The aim of the game is for the two officials to swing into each other, causing one another to knock into their bin bags, with the bin bag then being removed.


Whoever has the most bin bags remaining wins. 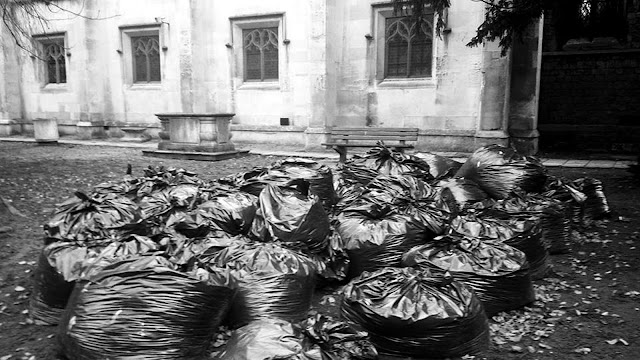